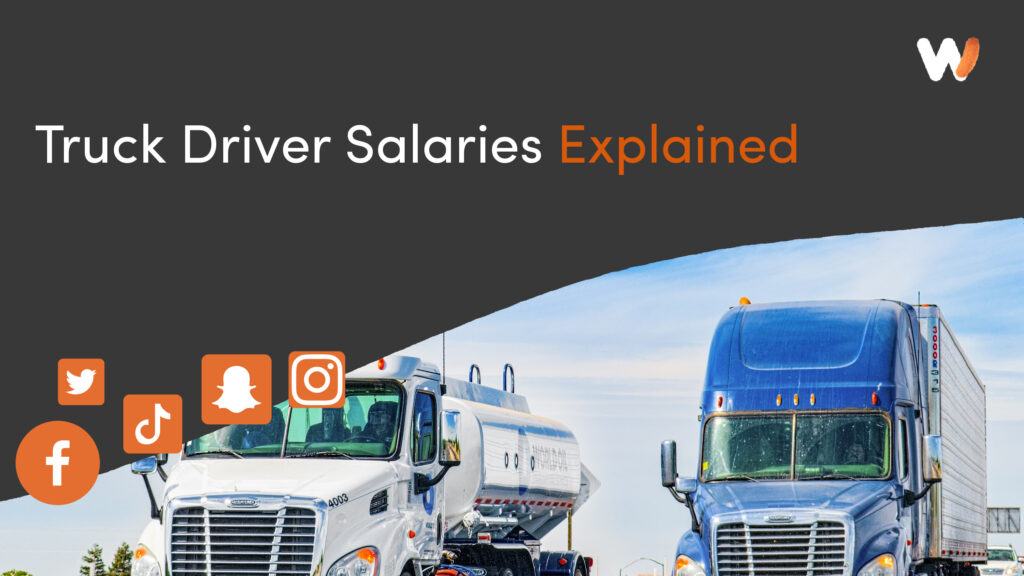 Truck driver salaries are one of the key elements that CDL drivers look for when seeking a new job. In fact, in one of our most recent surveys, 40% of respondents listed higher pay as the number one incentive for switching fleets. Amid a driver shortage, knowing where your company falls on the compensation scale is key to keeping your carrier brand competitive. Today’s CDL drivers are in high demand, and high demand comes with good pay. However, there are a lot of different factors that go into determining what a competitive driver’s salary should look like. Some of the most important factors include years of experience, location, route type (OTR, Regional, Local), freight type, the number of miles driven, and special qualifications such as endorsements.  Additionally, sign-on bonuses, longevity bonuses, and performance or safe driving incentives should also be factored into overall numbers. Let’s dive in and break things down!

Please include attribution to https://work4.io/truck-driver-salaries-explained/ with this graphic. Direct image link.

According to recent reports, the average CDL driver makes around $77,473 per year, however, unlike other careers, truck drivers are not typically paid an annual salary. Instead, most drivers’ pay is determined by a combination of a base rate and then accentuated by other factors such as specialty pay and bonuses to achieve a combined compensation package. Calculating your compensation package offering can sometimes be complex, but it doesn’t have to be. Understanding the nuances of pay is as simple as understanding some of the trucking industry’s standard terminology.

Pay per mile, often listed as CPM (cents per mile) is one of the most common types of pay across the trucking industry. There are three main ways in which CPM can be calculated for your drivers:

With practical mileage, the onboard ELD, or electronic logging devices in your fleet’s trucks can be used to calculate the most efficient path between the starting location and the destination address. The process is similar to the way that Google Maps or Wayz would calculate a trip via satellite data.

Also known as Actual Mileage, this rate is calculated using the actual miles driven based on the vehicle’s odometer reading. This rate includes all hours of service (HOS) miles accrued including any changes in routes or stops. To determine the actual mileage, a driver’s truck odometer is read before and after the trip, and the driver is paid for the difference.

As a side note, although CPM is one of the most common pay scales, during our 2022 Driver Recruiting Report we found that 94% of drivers were more likely to click on a job post that stated the annual pay vs a job post with the CPM listed. So, even if your pay rate is CPM it may be in your best interest to calculate it out to an average annual salary for your job descriptions. If you do wish to keep using the CPM in your descriptions, remember to include the number of miles per week that drivers can expect in order to give them a clear picture of earning potential.

Though hourly is a  familiar standard in many industries, it’s not quite so common in trucking. Hourly pay is typically utilized by intrastate carriers that deliver their goods from point to point within a range of 150 miles or less from their hub. This pay structure is often offered by grocery chains, and retail chains of warehousing businesses such as UPS, and FedEx. Companies that offer hourly work often expect more from their drivers than just driving. Typical responsibilities include loading and unloading freight, direct customer interactions, and multiple stops per run.

This pay structure typically varies depending on experience and is often associated with strict schedule adherence and heavy lifting. A benefit for your hourly drivers is that overtime hours can significantly increase their final pay.

Salaried positions offer a level of consistency and predictability to your compensation package. As we said before, listing an annual salary on your job postings may increase your candidate applies so it may be worth looking into. Salaried drivers are typically paid weekly for the duration of their contract.

Pay Per Load is the least common type of driver base pay, it is generally best suited to carriers specializing in agriculture, oil, and gas industries, or local deliveries. With this pay scale, your drivers earn a flat rate of pay for each load they deliver regardless of hours or miles.

There are a lot of different types of compensation that are available to drivers. Below we’ll discuss some of the most common options for rounding out your compensation package.

Pay per day, or per diem, is a non-taxable daily allowance to cover hotels, meals, and any other incidental expenses that your drivers may incur while on the road. Offering a per diem won’t necessarily change your driver’s annual income, but it does mean that they may pay less in taxes. You can structure your company’s per diems by day, per mile, or as a percentage depending on what makes the most sense for your fleet.

Stop pay is a way to compensate your drivers for the time spent at each facility particularly if they have multiple stops to make. This form of compensation generally doesn’t include the pickup location or the final destination, but rather is intended to compensate the truck driver for their additional time spent executing additional stops. This pay is generally seen as a great benefit by drivers since every minute not spent adding miles to their logbooks would normally equal time they are not earning income.

Similar to stop pay, detention, or layover pay kicks in when your drivers are held up at a shipper or receiver for an extended amount of time instead of on the road. As an industry-standard, scheduled drop-off and pick-up times often include a two-hour buffer, but when a load is held up for longer than that a good practice is to offer your drivers an hourly or fixed rate for that time period. Detention and layover pay are particularly important forms of compensation for drivers who are paid by CPM since if the truck isn’t moving, they aren’t earning. The difference between detention and stop pay is that detention pay covers extra time spent at a single shipper or receiver, while stop pay covers multiple short stops.

Accessorial pay is not usually offered to hourly drivers since their wage already covers completing extra tasks. However, for drivers on other base pay packages, you can think of accessorial pay as bonus pay for completing tasks beyond driving. This broad pay category can be used by carriers to compensate drivers for services performed beyond hauling and maintaining a load such as:

These are just a few examples, so be sure to ask customers exactly what extra duties if any will need to be handled by your drivers.

Special incentive pay is designed to acknowledge that some loads are more difficult or dangerous than others. Special incentive pay may be necessary for loads that are tarped, refrigerated, or contain hazardous materials. It may also be warranted if a driver will need to navigate difficult roads, cross borders, or will encounter other non-typical factors along their route. Many of the types of loads that qualify for special incentive pay will also require your drivers to have special endorsements or certifications such as  Endorsements such as HAZMAT, Tanker, Doubles/Triples, or TWIC cards.

While one of the above-listed base pay structures will make up the majority of your fleet driver’s income, many carriers offer additional pay through bonuses. Some of the most common bonuses are for fuel, safety, and inspections. Other companies offer referral bonuses for drivers who refer friends and family. Many carriers offer hiring bonuses for signing on to their job or referral bonuses for bringing in new drivers. Hiring bonuses or signing bonuses have been popular in years past, but we found in our driver survey, that only 8% of drivers polled chose signing bonuses as an incentive to click on a job title. With that in mind, as we head into a new year, you may want to rethink your bonus offerings to attract top talent.

Team drivers are typically paid on a CPM structure just like solo drivers. The rate for a team is typically higher than for a solo driver, but it is generally less than double the rate even though the pay is split between the two drivers. The advantage to hiring teams though is the number of miles they can log since one can drive while the other sleeps keeping your trucks in constant motion.

Also known as “percentage of the load,” this is the most common pay structure for owner-operators, even those that are leasing their truck. Rather than being paid based on mileage or time, owner-operators earn a negotiated percentage of either the gross or net revenue on each load. Additionally, these drivers will also expect to be paid all or almost all of the fuel surcharge for the haul. This model is generally among the highest truck driver pay in the transportation industry This pay structure typically works out to be one of the best compensation models in the industry.

Final Thoughts for the Road

As you can see, the types of truck driver salaries available are as diverse as the loads your drivers carry. During our recent driver survey, it was no surprise that drivers listed compensation at the top of the list of factors from job satisfaction to driving job search behaviors. However, one fact that was interesting is that 60% of drivers said they would opt for a lower pay rate if it meant being home more.

As we travel through the road of changes the pandemic has left in its wake, drivers just like most of the country have begun to shift priorities and are beginning to look for more work-life balance. Be sure to consider that fact as you drill down into your fleet’s compensation packages and begin to make adjustments for the new year. Remember that as important as compensation is to your driver’s bonuses and benefits were also listed as a top factor in job satisfaction with 32% selecting it as the top factor for them.

At Work4 we love to dive into the data that drives the transportation industry and specialize in using that data to deliver better quality higher-volume candidate leads for you. With social job sharing, text recruiting, candidate nurturing and employer branding we can help seat your trucks in record time. Contact us today to see how we can help develop a recruitment marketing strategy that keeps your trucks on the road. Try out all of the features of our custom ads campaigns for 5 weeks and see the difference in your recruiting stats. 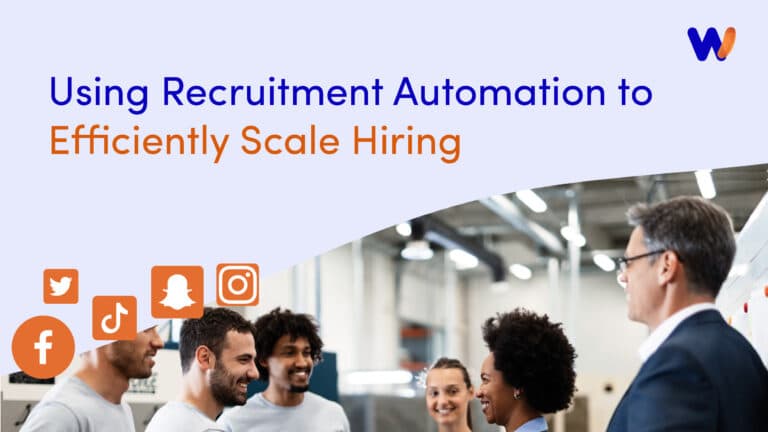 In today’s candidate-driven market, it’s more important than ever for companies to ensure that their recruiting process is streamlined and efficient. While there are a 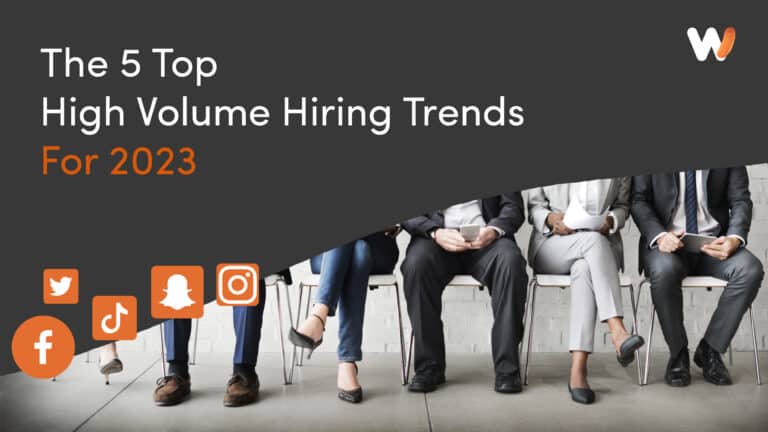 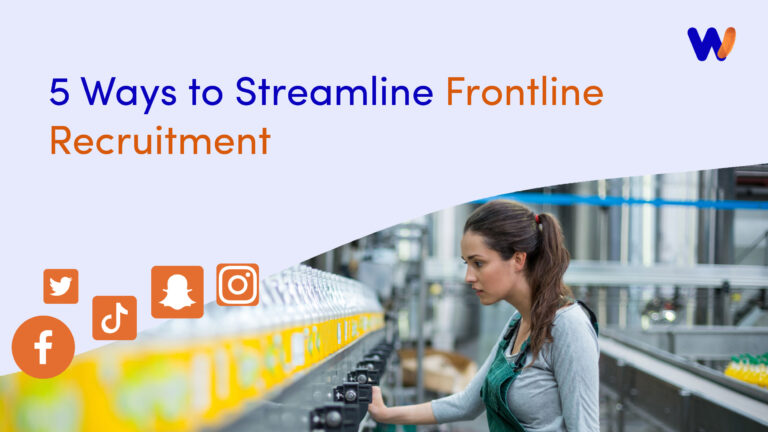 Frontline workers make up a large percentage of the US workforce. In fact, research indicates that more than half of all U.S. employees are considered

Submit the form and we’ll reach out shortly to follow up with you.